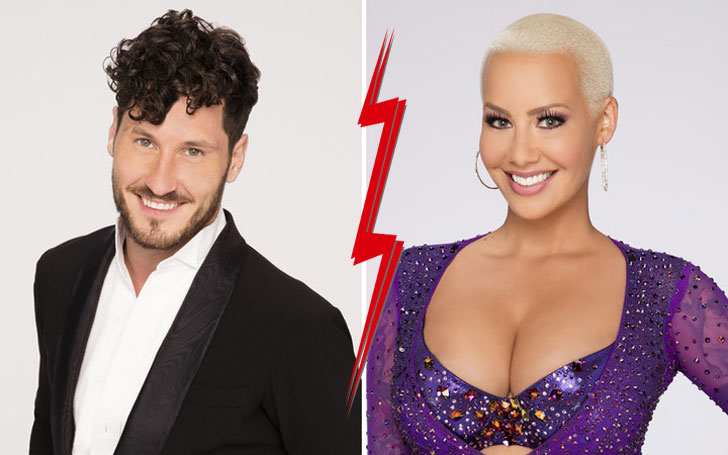 Val Chmerkovskiy (born 24 march,1986), who is popularly known as a Ukrainian-American professional dancer and choreography, has won twice in Dancing with the Stars.

Though Rose and Maksim were eliminated in 6 weeks, Val's move forward to win the season with his dance partner  Laurie Hernandez.

As Rose and Chmerloviskoy were spotted together at her birthday party after the completion of the DWTS. They seem very comfortable and happy with each other. Not only this but, Val and Amber were together in Maksim and Pete's baby shower too.

Finally, Amber Rose made their relationship in public through her official Instagram page, sharing a photo of the couple kissing each other in the year 2017. As the news spread like a wildfire posted on Instagram.

Though the pair seemed like a close deal, they split only after five months of dating.

According to Amber Rose, they broke up because of their personal matter. What was the main reason, who knows? But still Rose explained that they care for each other and are close to each other's family.

Is Val Chmerloviskoy dating someone?

Only after few months of separation, Val Chmerloviskoy was spotted with the fellow dancer Jeena Johnson.

The couple quickly admitted their relationship.

The happy duo Val and Jeena after dating for nearly a year got engaged in 2018 and tied the knot in 2019, They got married in a very intimate ceremony.