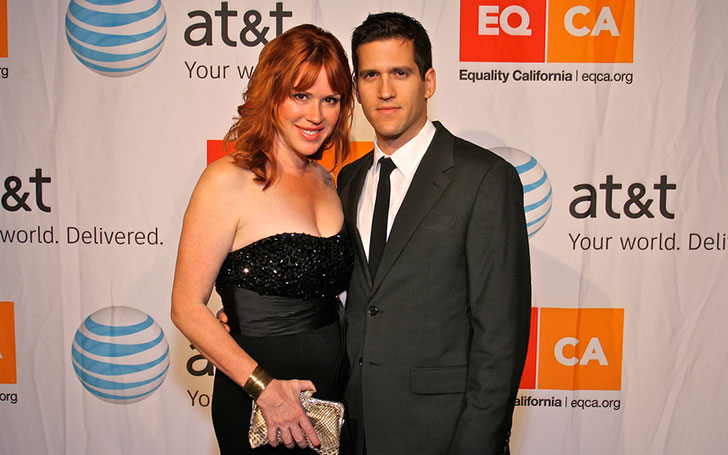 This 5 feet 8 inches actress is multi-talented with her being a singer, dancer, and author as well. She was born on February 18, 1968, in California, USA. She has a net worth of $11 million.

Let's know more about her married life and her past affairs.

More about her Married Relationship

Molly Ringwald got married to her first husband on 28 July 1999. His name was Valery Lameignere and he is a writer. They got divorced in 2002.

My daughter @tildagianop sent me a pic of baby me I've never seen! #tbt

She then got married the second time, with the writer Panio Gianopoulos in 2007. They are still together and have three children together.

The three children are named Mathilda Ereni Gianopoulos, Roman Stylianos Gianopoulos, and Adele Georgiana Gianopoulos. There are in a healthy relationship for over a decade now.

Also Read: Molly Ringwald's net worth & salary go hand in hand with her amazing career. What's her net worth?

Molly Ringwald has dated quite a few men in her lifetime. In the mid-1980s, She was dating an American actor Anthony Michael Hall. Both met on the set of Sixteen Candles.

Molly Ringwald played the character of an awkward teen who had to deal with the school geek's who was played by Anthony Michael Hall crush.

And the secret teen idols were attracted to each other and they started dating each other in the filming of their next movie The Breakfast Club. They dated for one year from July 1983 to June 1984.

She also dated an American guitarist Dweezil Zappa. Zappa made a cameo role in her film Pretty in Pink. Dweezil and Molly had been dating since April 1985 after both of them were introduced by Zappa sister Moon Unit.

Both of them were into each other and they wrote songs which Molly call " the worst". Molly is the daughter of Bob Ringwald who is the blind jazz musician and she has been singing professionally since she was 4 years old.

She was also in a relationship with musician Adam Horovitz from 1987 to 1988.

Adam is an American musician, rapper, producer, and actor. He is a member of hip hop group the Beastie Boys. He is currently married to a musician and feminist activist Kathleen Hanna.

Some Known Facts About Molly Ringwald

Books: When It Happens to You: A Novel in Stories, Getting the Pretty Back