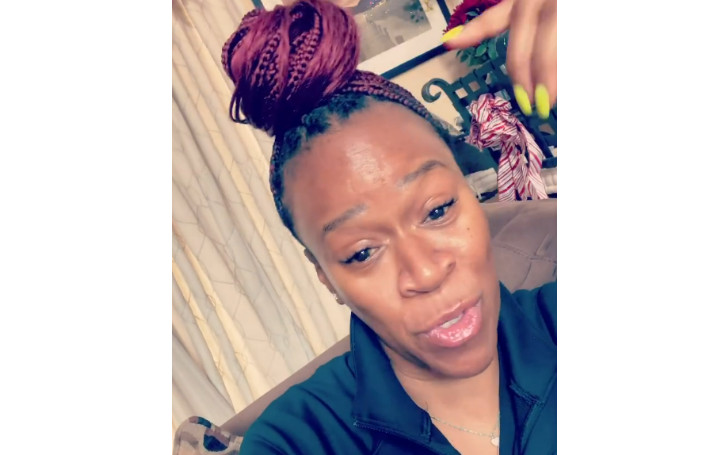 Tashera Simmons is an American actress, author, businesswoman and producer known for appearing in movies and TV shows like Uncensored (2021), Never Die Alone (2004), and Starter Wives Confidential (2013). Further, she is known for being the ex-spouse of DMX, a late American rapper.

Tashera Simmons was born on 10 April 1971 in New York, United States. As of 2021, she is 50 years old. The author holds American nationality and belongs to the black ethnicity.

She enjoyed her childhood in Yonkers, New York. Her parents raised her alongside seven siblings. The author dropped out of high school in 11th grade.

She has a decent look with black eyes and black color hair. The estranged wife of the rapper stands at the height of 5 feet 9 inches and has a moderate weight.

Do You Know Simmons Is A Brilliant Author?

The author has written a book You Think You Know, But You Have No Idea. It is a tell-all book where she has revealed the saddest parts of her life. The book became a massive hit in no time.

In the book, the actress also discussed separation from her ex-husband, DMX. The actress has also revealed about drugs cases and extramarital affairs of the rapper. Also, she disclosed her ex-husband and his bad sides.

Similarly, Never Die Alone alum revealed about her mother in an interview, how she had to face an awful moment of her life due to her mother's deed.

She, along with her siblings, was abandoned from the house. Simmons told with tears in her eyes that her brother was her uncle as her mother got pregnant with her grandfather's baby.

The relation between her mother and grandfather was the most shameful thing Tashera ever faced in her life. However, she revealed the truth by trying to cover the facts.

Her Relationship: Husband And Children

The actress was married to DMX. They got married in 1999. The ex-couple was childhood sweethearts as they met for the first time when she was 11 years old and started dating when she turned 18.

The former duo cherished their married life for about 14 years and got separated in 2014. They have four children, Praise Mary Ella Simmons, Xavier Simmons, Tocoma Simmons, and Shawn Simmons.

The reason for the separation of the childhood sweethearts was reported to be his extramarital affairs. He was in a relationship with several women. It was reported that Tashera was demanding $10k annually for raising children after separation.

Besides, Tashera Simmons, Rapper had relationships with Yadira Borrego, an American YouTuber, social media personality, and businesswoman. Borrego and the rapper were in a relationship for around seven years (2003- 2010).

The rapper had been a man of colorful nature. He is reported to be the father of 15 children from different partners.

DMX Was A Popular American Personality

DMX was an American rapper (1970- 2021). He was born in Mount Vernon, New York, US. The rapper started his career in the showbiz industry in 1991 and was actively involved till his death.

He died on 9 April 2021 in Westminster County, New York. The reason for his death was a cocaine-induced heart attack. He was hospitalized for many days before his last breathe.

He had featured in different movies like Belly, Backstage, Top five, Last Hour, Death Toll, The Bleeding, Lords Of The Street, King Dog, Beyond The Law, and Doggmen.

Some of his music albums are The Great Depression, Undisputed, Exodus, Year of the dog. Again, Grand Champ, Flesh of my flesh, the blood of my blood, and more.

The late celebrity had been part of the video game Def Jam Vendetta. He had won the Favorite Rap/Hip-hop Artist Award and was nominated for many big titles such as Best Rap Video Award, Best Breakthrough Video Award, etc.

The ex-spouse of the late rapper is probably living a luxurious life with her family. She is estimated to have around $500 thousand. Her major source of income is her involvement in different movies and TV shows. Also, the median salary of a television actor in America is $32500.

Besides, Simmons is active in social media and often uploads different pictures and videos depicting her lifestyle. The media personality has more than 157k followers on Instagram as of the writing of this article. She earns $470.25- $783.75 per post on Instagram.

Talking about her ex-husband, he was reported to be bankrupt in 2013. As per sources, he had a negative $1 Million at the time of his death. Despite having a good career in the showbiz industry, his controversial life may lead him to be bankrupt.

Besides, he had been in jail more than 30 times. He was charged with a marijuana case. Also, the rapper was sentenced to six months in jail for not paying $400 thousand for his children's upbringing.

The late rapper was sent to jail in 1986 for stealing a dog from a junkyard. With his deeds, he often made news headlines till his death.