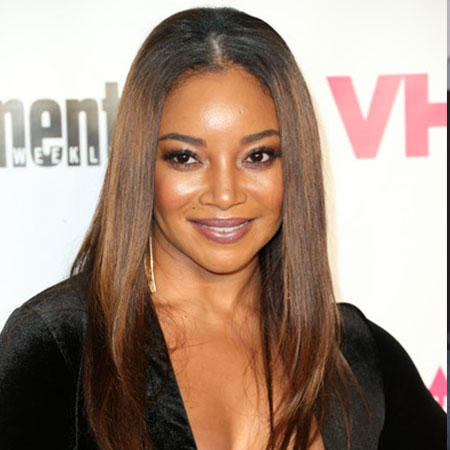 Born as Tamala Regina Jones, Tamala Jones is an American actress. She is popular for her roles in the movies Booty Call, The Wood, Kingdom Come, The Brothers, and Two Can Play That Game. She is also famous for her television roles as well.

Tamala Jones was born on November 12, 1974 and this makes her age 44 years at this time. She is of American nationality and her ethnicity is black. She has not talked about her education.

The details about Tamala Jonas's father and mother is hard to find the internet but she talked about her siblings named Tracey Cherelle Jones, and brother, Craig Jones.

Tamala is not a married woman so, possibly she couldn't have a husband and kids but was in a short relationship with Nate Dogg. Dogg left the world in 2011 from multiple strokes complications and she started dating Teodoro Nguema Obiang Mangueike.

Now, according to the reports, she is dating Big Gipp, an American rapper from Atlanta, Georgia, best known as a member of Goodie Mob. The couple is former lovers and started dating in 2006 but broke up because of personal misunderstanding.

But currently, sources reported that she is back to  Big Gipp. And Gipp was blessed with a child that he shared with Joi Elaine Gilliam before their break up in 2003.

Tamala is active in the Hollywood industry since 1995 and her first acting debut role was a guest appearance on the teen sitcom California Dreams and she plays a student in the short-lived ABC drama Dangerous Minds. Jones co-stars the roles on the 1998-2002 series For Your Love and the short-existed The Tracy Morgan Show.

She played a recurring role as Tonya, an ex-girlfriend of Flex on One on One. She starred as a guest on other television series including The Parent 'Hood, The Fresh Prince of Bel-Air, Veronica's Closet, My Name Is Earl, Studio 60 On The Sunset Strip, and Malcolm & Eddie.

Tamala's  Movies reputations include Booty Call, The Wood, and Kingdom Come. She was voted by the readers of "Black Men Magazine" as one of "The 10 Sexiest Women of the Year" in 2000 and similarly in 2001 as well.

Tamala Jones is not only an actress, but she is also a mega producer and succeeded and excelled among her fellows. She started her career as a teen model and prior to that time, she first debuts her acting by imitating characters from Fame and Good Times as a child.

Tamala joined in acting school in her sixth grade and finally landed her first acting at the age of 16 in a national commercial for IBM in 1990. Working so hard for the past 22 years in Hollywood, the talented actress estimated an impressive net worth of $4 million.