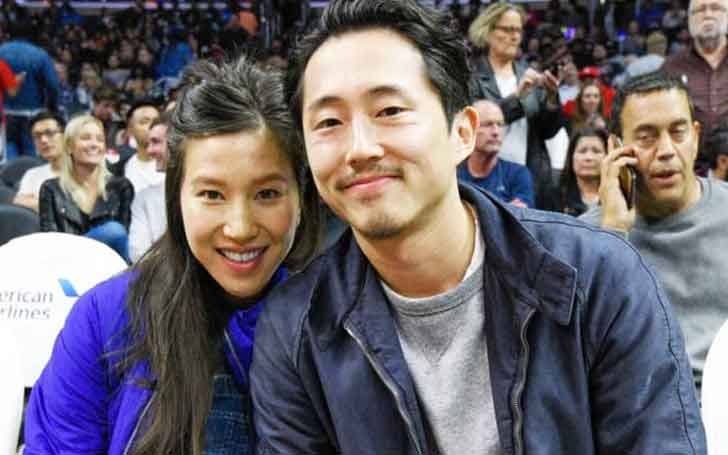 Getting married, and becoming a loyal husband, are two different things. Despite all rumors, Steven Yuen and Joana Pak have been successfully married for the past 1 year. But what really has been cooking on between them? Are they happy

Steven first met Joanna at a bar back in 2009. He was working as a waiter at the time. They then began to start dating and spent days together for six months.

It was then when Steven made a move towards Hollywood, Los Angeles. They kept their long distance relationship alive until Joana also made a shift to Los Angeles, to pursue her photographing career.

It was then after seven years on December 3RD, that the couple finally decided to explore their relationship further by tying a knot together.

The wedding was conducted in a “short and sweet” Protestant manner, which Steven describes as being the favorite part of his big day. They were both attired in a classic Korean Hanbok, said they both wanted to celebrate their marriage in their own cultural way.

The bride’s dress was designed by MeeHee Hanbok Couture. Joana wore a floral embroidered silver top and a fluffy white skirt, with a pair of Celine pumps. The grooms charcoal, white suit was designed by Betty Hanbok.

Steven and Pak, are completely happy and in love with each other, or at least that’s what their Instagram posts say about them. Pak now serves as a full-time mother to their son. Unlike Steven, she is now taking a recession from  her career to focus entirely on parenting little Glen.

Before Steven’s marriage to Pak, rumors had been circulating around the media, that the Korean actor was having a secret affair with his on-screen wife Maggie. The two met at the set Of Walking Dead where Steven portrayed the role of Glen, while Cohen had Maggie’s role. Their passionate love in the series caught the attention of their fans, and questions were being raised against.

The speculations were all turned down by Lauren, stating that they were not romantically involved with each other. She also mentioned that they had met each other outside the set, but their frequent dates were entirely business oriented.

The rumors were eventually laid to rest by Steven’s marriage to Joana.

A gift from the heavens

After their bonding in 2016, the couple announced their first child on social media. They decided to post a series photo-shots on Instagram revealing Joana’s pot-belly.

The photos showcase the couple cuddling each other for the camera, with Steven sometimes cradling his wife’s baby bump.

Pak gave birth to their first son 17th March 2017. The baby was named Jude Malcolm Yuen. The proud father posted a snap of his newly born in Instagram revealing his tiny little hand.

thanks. we are well. much much love.

The baby boy is already a minor celebrity in social media owing to his mother’s expertise in photography and father’s determination to bring to kid into the spotlight.