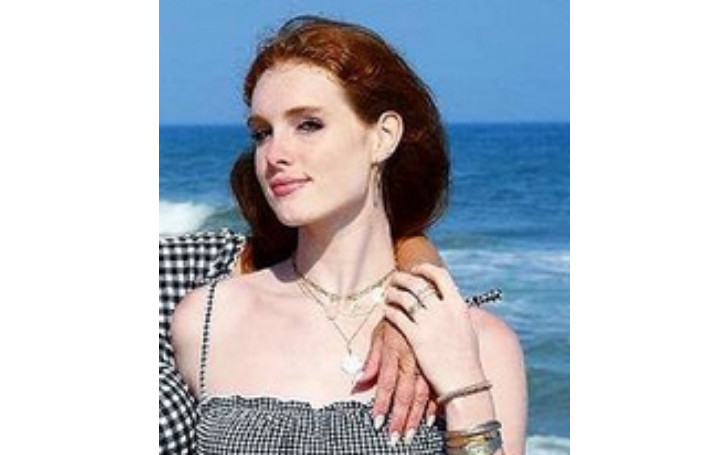 Rowan Francis Henchy is an American star kid and television personality who rose to fame as the elder daughter of Brooke Shields, an American actress, model, TV producer and spokesperson and Chris Henchy, an American producer and screenwriter. The star kid is famous for her looks and fashion sense whenever she is captured in media cameras with her family members.

Rowan Francis Henchy was born in 2003 in Manhattan, New York, the United States of America, making her 19 years old as of 2022. She celebrates her birthday on 15 May every year. She was born as the oldest child to parents Brooke Shields and Chris Henchy and grew up with a younger sister, Grier Hammond Henchy, born in 2006.

The celebrity daughter holds American nationality and belongs to the White Caucasian ethnicity. She believes in Christianity.

Hency is a beautiful lady with brown hair and blue eyes. She stands at the height of 5 feet 4 inches and weighs around 50 kg. The star kid is stylish and seems to be interested in modeling and acting just like her mother.

The star kid isn't dating anyone currently. There is no media coverage of her love life. On the other hand, her parent's relationship is a topic to be discussed.

Her parents, Brooke Shields and Chris Henchy, tied the knot on 4 April 2001. Before, that the duo engaged during the vacation in Mexico. The beautiful duo is blessed with two daughters, Rowan Francis Henchy and Grier Hammond Hency.

Previously, Brooke Shields was in a marital relationship with Andre Agassi, a tennis player. He is a former world number 1 tennis player, 8-time major champion, and a 1996 Olympic gold medalist. Further, the ex-duo enjoyed married life from 1997 to 1999. They do not seem to share any children.

As per the June 2008 issue of Health magazine, Brooke Shields lost her virginity at 22 to actor Dean Cain. Also, the actress revealed her good friendship with a late pop star, Michael Jackson.

Her Mother Is A Popular Actress

Rowan's mother, Brooke Shields, was born on 31 May 1965 in Manhattan, New York, the United States of America, to Teri Shields, an actress and model and Francis Alexander Shields, a businessman. She was raised alongside siblings Christina Shields, Thomas Gore Auchinc Loss Jr. and Olympia Shields.

The actress studied at New Lincoln School and Dwight- Englewood School. She graduated with a bachelor's degree in Romance Language from Princeton University.

The veteran actress started her career at 11 as a model. Starting as a child artist, she has bagged 105 acting credits now. She is best recognized for The Blue Lagoon, Pretty Baby, Wanda Nevada and Suddenly Susan.

In addition, the 47 years old actress has shared the screen with Tom Cruise, James Spader, Jeff Marcus, Samantha Bee, Ricky Garcia, Brendan Fraser, among others. The actress is the winner of the 3 Golden Raspberry Awards. She has been nominated twice for Golden Globe Award and Satellite Award.

Her Father Chris Henchy Is A Media Personality

Rowan's father, Chris Henchy, is a 1964 born screenwriter and movie and TV producer. He was born in New York City, United States of America, to Patricia Henchy and Michael Henchy.

The celebrity husband studied at Saint Mary on Hill Catholic School. Later, he graduated from the University of New Mexico with a B.S. degree in finance. After graduation, Chris moved to New York to work on Wall Street. However, he left the job and tried his luck in comedy. He was a former stand-up comedian on MTV.

As of now, Henchy is best known for his amazing writing skills. He had written several comedy films, including Land of the Lost, The Other Guys and The Campaign. Also, he is known for co-creating the website Funny or Die. He serves in the creative council of Represent Us, a nonpartisan anti-corruption organization.

Net Worth and House

Rowan Francis has appeared in VH1: All Access in 2006. Likewise, she appeared in the show 20 cutest celebrity babies. Currently, she is focusing on her education. The star kid maintains a

Talking about her mother's riches, Brooke Shields has a fortune of around $40 Million. The actress's major income source is her showbiz career. The model also earns from her social media presence. Shields has 1.4 million followers on her Instagram account and her estimated earning per post is $2898- 4830.

The Blue Lagoon alum gathered good money from films and TV shows like A Castle for Christmas, Sahara, Furry Vengeance, Chalet Girl, After Sex, The Other Guys, I Can Make You Love Me, Wet Gold, The Bachelor, Just You and Me, Kid, Freeway, Daisy Winters, Tilt, Flower Shop Mysteries, The Seventh Floor, Black and White, Nothing Lasts Forever, and more.

Likewise, her father, Chris Henchy, is estimated to have around $15 Million. He has earned major of his fortune from his involvement in different sectors, including the showbiz industry. The has earned good money from films and TV shows like Daddy's Home, The Campaign, Good Cop, Baby Cop, Step Brothers, The Boss, Get Hard, The Virginity Hit, Tammy, The House, Life of the Party, Holmes and Watson, GDP Smackdown, Winning Recipes, among others.

Rowan lives with her family in a luxurious house in New York. Reportedly, Brooke bought her New York house (consisting of six bedrooms and eight bathrooms) in 2013 for $4.25 Million.