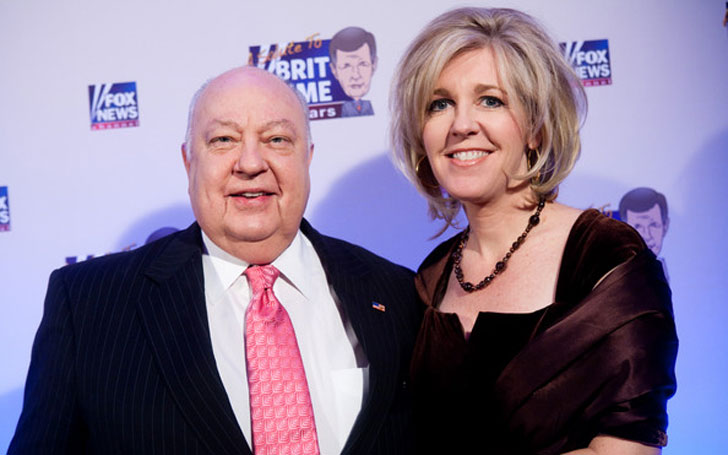 Trust, one of the factors which builds and holds relationship together. People break up their relation where some married couple even gets into divorce even after many years of their married life when they hear rumors about their partners cheating on them. On other hand some couples have their trust so strong that  rumors and gossip never breaks their affection  .One of the few couples is Roger Ailes’s and his wife Elizabeth Tilson.

We all have faced and seen, when a man cheats, women knocks court for divorce over rumors she heard from unwanted sources. We can also see a women trusting her man entirely even after hearing bad things from different ends, this kind of trust can’t break and affect their married life. Similar case can be seen with Elizabeth Tilson, wife of Roger Aile’s who were married back in 1998.

Sexual Harrasment accusation on Roger Ailes’s by Gretchen Carlson’s and many other women.

Fox  News CEO Roger Alies’s married life and job,  both came under shade, when he was accused of sexual harassment by former Fox News host Gretchen Carlson on 6th July 2016 .Carlson filed a lawsuit against Roger for sexually harassing  her during  her work  days on Fox news .Carlson was called a 'man hater' by Roger Alies and he also said that she needs to get along with boys.

Gretchen also accused that Roger not only harrased inside the office but also outside in public .Roger used to make her female clients to bend and say "HELLO" to Roger when he approaches to them.While working Roger also  Carlson that "he have slept with other three Miss America but no with her".

Carlson, 50 was crowned  1989 Miss America by then she havent gain any fame so far except by working on some of  the TV news as commentator and author.Is this accuse just for gaining fame?

Gretchen with her Miss America crown

After this accusation, other news stormed on Roger  .Many famous face came into  media accusing Roger Alies for sexually harassing  them when they were working with Roger in their early days .One of the victim, Marsha Callahan  confessed she and roger met in 60s.For the auditioned of The Mike Douglas  Show which Roger was producing at the time, Roger asked Callahan to lift her skirt up for several times during the audition. Callahan also said he told her that she needed to sleep with him to get the job.

You will be surprised to know that dozens of other TV  stars, model, actress,a Republican committee worker  filed law suits against Roger Alies for sexually harassing them.Learn about Fox CEO and about his accusation down here in Gretchen's Interview.

Fox Network have agreed to pay $20 million USD to Gretchen Carlson to settle down a lawsuit .Fox also accept resignation of Carlson  after 2 months of accusation and made public apology stating “ We sincerely regret and apologize for the fact that Gretchen was not treated with the respect and dignity that she and all of our colleagues deserve,".She made some money for sure with this accusation for sure.

His wife seems super supportive on her husband Roger ,as he said Gretchen and her attorney are working hard to frame him of accusation. Many rumors came out that Elizabeth soon is going to file a divorce paper ,but nothing happened as expected till now. The bond between these married couple seems very strong.

As for now her wife haven’t file any divorce on Roger.Elizabeth dedications ,love and belief towards to Roger is one of the inspiring act that we need to adopt in your married life. Hope this marriage will last for rest of their life.Whereas Carlson act grabbed attention of many people.On an interview she as said that she wants to make women working environment safe.