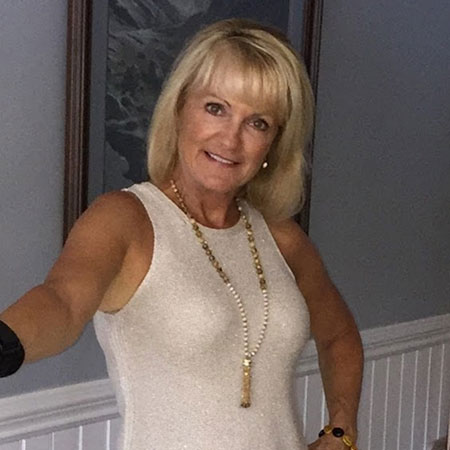 She is a social media personality, best known as the mother of internet comedians (especially YouTube), Logan Paul and Jake Paul, her name is Pam Stepnick.

Her life partner Greg Paul is quite famous on Instagram, with over 570K followers.

His Instagram slogan which is quite famous says, ”If you’re not living on the edge, you’re taking up too much space. The weight of regret weighs heavy.”

King Kong Da Savage Pom is her son’s dog, whose photo she keeps posting on her Instagram. By those post, we can predict that she is an animal lover.

What is Pam Stepnick age and height?

Pam Stepnick got envolved into YouTube on March 2017, by creating her channel named “VlogMom”.  It has only been two years on YouTube, she had managed to earn more than 814K subscribers and over 27 million views. Until today's, she has been sharing her fun and amusing vlogs on her chancel which includes her solo, video likes pranks, reactions and day to day stories and her collaborative videos with family members.

Pam content on YouTube is quite interesting, she made a numerous video with her star kids Logan and Jake Paul, which are much entertaining. If you once visit her channel, then videos you should not miss are ‘I Took Logan to the Dr… He is Having Issues’, ‘Tessa Taught Me How to Twerk’, and ‘Vlog Mom Reacts Jerika’.

The first video of her earns more than 3.5 million views, which features the Youtuber, Tessa Brooks, learning how to twerk from the multi-faceted dancer and model. Her second video holding views of over 2.1 million which is the collaboration with his son Logan and third video consist of her talks about her “daughter-in-law Jerika.” Till date, this vlog holds more than 1.3 million views and more than 37K likes with numbers of comments and shares.

With similar entertaining content, her other vlogs by ‘VlogMom’ is also great to watch. Before being on YouTube, she has reserved as a registered nurse at the UHHS Westlake Surgery Center and several other medical centers. She had also played on TV mini-series documentary (The Mind of Jake Paul).

Pam Stepnick is a married woman. Stepnick is married to his husband Greg Paul. Paul is also a commercial roofer and licensed realtor. There is no information about their relationships and affairs. But, got married in 2004, 16 October.

Read also: The American Actress Felicia Day Has a Daughter? Know if She Married to Her Partner

But Stepnick keeps sharing her photos with him including their children. To show her love and care to him and children.

On, 2018 Stepnick shared a photo of there 14th Anniversary with a caption, “Happy Anniversary my sweet husband!! 14 years of bliss! You have been an amazing role model for ALL of us!”.

Happy Anniversary my sweet husband!! 14 years of bliss! You have been an amazing role model for ALL of us! ❤️❤️❤️❤️❤️❤️❤️❤️❤️

According to socialblade, her estimated monthly earnings $10-$159 and estimated yearly earnings of $119-$1.9K from YouTube. But her net worth is still unknown.

@jakepaul Notice how the trim on my sweatsuit matches rainbro. #notplanned

Interested in: 40 Years American Fitness Expert/YouTuber Elliott Hulse Dating a Girlfriend or He Is Secretly Having a Happy Life With His Wife?

But her son Logan has a reported net worth of 15 million and her other younger son has an estimated net worth of $8 million. By, seeing her social media post and lifestyle on her channel.

The figures earned by her family is enough for them to have a luxurious and quality lifestyle.