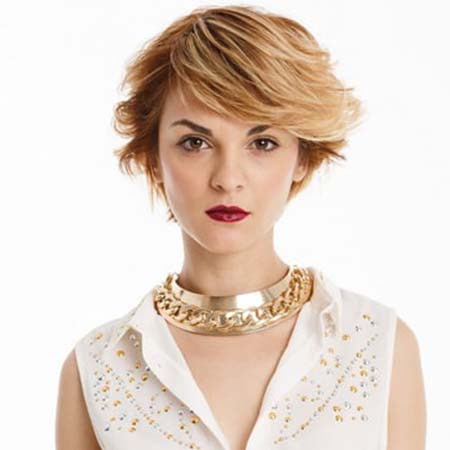 The famous actress Madalina Anea is a Romania's most sought actress. She is highly loved and praised actress better known after starring in the hit TV show 'Lost Angels' and as Tatiana Romanova in the 2016 release of Anthony Hickox's anticipated Nazi epic 'Exodus to Shanghai'.

Though the exact birth year and age of Madalina is not known yet, she celebrates of birthday on March 1. Likewise, she belongs to white ethnicity and holds Romanian nationality. Madalina has not shared any personal information about her parents.

Madalina trained for three years at the National University of Dramatic Arts (considered one of the best acting schools in Europe) where she graduated top of her year.

Madalina has a slim body figure with a tall height of 5'8. Likewise, Madalina has dark blond hair with a pair of attractive brown eyes. Thus one can say that she has well maintained her body to its optimum.

Madalina got her debut appearance in the independent movie, 'A Princess for Christmas' where she played the role of Abigail under the direction of Michael Damian.

After graduating, Madalina went straight into professional theatre, consistently working back to back in plays such as 'Children of the sun', by Maxim Gorky, 'The Bald Soprano', by Eugene Ionesco, 'Getting attention', by Martin Crimp, 'Life of Paganini'by Mick Davis,'The Tiger', by Murray Schiesgal.

Some of her popular movie and shows where she got the fame are listed below.

Putting some light to Madalina's personal life, the actress is a married woman. She is in a marital relationship with her boyfriend turned husband  Anthony "Tony" Hickox since 2015. Anthony is an English film director, producer, and screenwriter.

The pair hasn’t disclosed when and where they got married. Madalina and her husband Anthony often share their beautiful pictures on their Instagram account. The duo doesn't have already children yet as both are currently focusing in their career.

Madalina Anea's Net Worth and Salary

The exact amount of Madalina's salary is not revealed yet but one can estimate that she earns a good salary bracket from her splendid acting career. Madalina is enjoying a lavish life with an estimated net worth of $900,000 as of 2018 according to networthpost.org.

So far, Madalina has worked in several hit movies and TV series which helped her to add a good sum of money to her bank balance. Likewise, she has a long way to go through her career, hence her income and net worth will certainly increase along with her career.