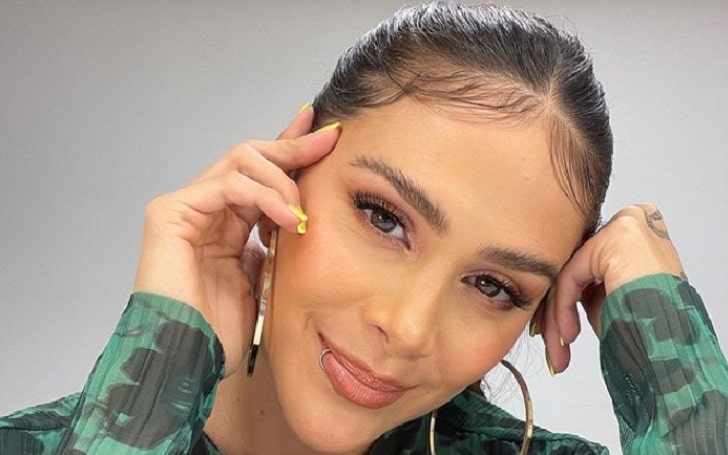 Greeicy Rendon is a famous Colombian actress and singer who gained fame for her appearance on the telenovelas La Ronca de Oro and Chica Vampiro. Besides, she is also recognized for her debut album entitled Baila, in which she has featured artists like Nacho and Anitta.

On October 30, 1992, Greeicy Rendon was born in Cali, Valle del Cauca, Colombia. She is 29 years old, and her estatura (height) is measured at 5 feet 6 inches (1.68m). Her parents are Luis Alberto Rendón and Lucy Ceballos. She lived with them in Cali for the first five years and moved to Bogota.

She is known mononymously as Greeicy, but her full name is Greeicy Yeliana Rendón Ceballos. The actress developed an interest in acting from an initial age. She was passionate about interpretation and music. Not only that, she took classes in acting, piano, flute, guitar and singing.

The prominent Colombian actress is expecting her first child with Mike Bahia. She has shared various posts about her pregnancy through her Instagram handle. Rendon and Mike began their romance back in 2012. However, the blissful couple has not opened up about their marriage or engagement.

They are not only a real-life partner but are also engaged in the same field. Not to mention, Mike is a Colombian singer and musician who rose to fame after appearing on the reality show La Voz Colombia in 2013. He is also known for his albums and songs like Buscándote, Yo Soy, etc.

People are eager to know what will be their first child, a boy or a girl. In addition, Rendon has also shown very intimate moments of her pregnancy including her ultrasounds. So, we can follow Rendon on Instagram as @greeicy to get more updates on her upcoming days.

Everything On Her Professional Career

Rendon's first on-screen appearance came in 2007 when she appeared in the reality show for talent children's Factor Xs. She was sponsored by the singer and composer José Gaviria. After that, the singer decided to get involved in acting and debuted in 2009 after appearing in Carolina Parra Campos in the tv series Cuando Salga el Sol.

In 2010, Rendon starred as Claudia Patricia Arias in the television series Women on the Edge. Moreover, we can see her appearance in other television series like La Pola, Correo de Inocentes, Primera Dama, La Prepago, La Ronca de Oro, etc. Also, she played Johanna Barrera in La prepago in 2013. Similarly, she was picked by the producers of RCN Televisión and TeleVideo as the protagonist of Chica Vampiro.

Rendon has also received various honors for her work, including the Premios TVyNovelas (2017) and MTV Millennial Awards (2018). Now, the talented actress is working on Wild Rythm and Solitaries Anonymous, which will be released soon.

Greeicy Rendon's Net Worth In 2022

The award-winning actress multiple times has preserved a net worth of around $1 million. She gathered a fair sum of money from her multiple profession as a singer, actress, and model. Apart from that, she is engaged in business and also earns something from advertisement deals (like Melina Vidler and Carrie Keranen).

The singer has a massive fan following on her Instagram account, where she has accumulated over 19.3 million followers. As per Influencer Marketing, Rendon earns around $38,376 - $63,960 from a single post on IG. Not to mention, the average pay of a singer in Colombia is $36,843,368. Moreover, Greeicy has appeared in numerous television series that have done well in the industry.