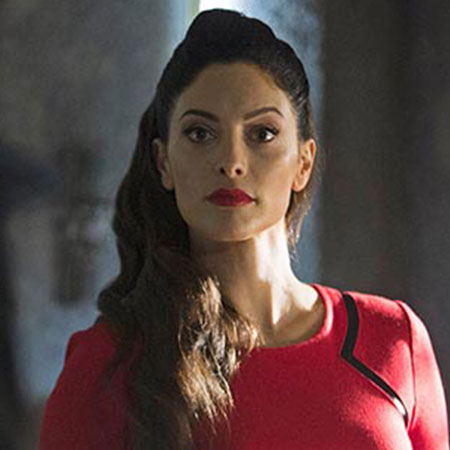 Erica Cerra is known for her portrayal of Deputy Jo Lupo on the Syfy series Eureka. She is also known for her characters in the series The 100, Supernatural and Lucifer.

Cerra's also worked in the movies; Power Rangers, Shark Killer, Rise of the Dammed, The Stranger, and Percy Jackson & the Olympians: The Lightning Thief.

Furthermore, she played in the music video of Michael Buble's song Save the Last Dance For Me.

The intelligent and beautiful Erica was passionate about media arena from early childhood. She eventually entered into the field as a child actress and sparkled the talent by her excellent performance.

Cerra was an Italian nationality who started child career when she was 8 years old doing some television commercials.

You may like this: John Dorsey Daughter Kerris Dorsey Dating a Boyfriend? Her Affairs and Rumors.

Erica Cerra got married to Raffaele Fiore in November 2010. After a year the beautiful actress Cerra gave birth to a beautiful daughter with her husband named Talia Serafina who was born on May 14, 2012.

Don't Miss: Jordan Hinson is Single or Married? Is she Dating? Know about her affairs and Relationship

According to the post of Instagram, She also has a baby boy who was born in August 2016.

The spouse leads a luxurious conjugal life with their baby boy and a daughter. There is no divorce or break up news between their relationship.

She started acting from an early age, Cerra's first appeared in the Canadian show KidZone then in numerous commercials as a child. The list of movies on which she played the role are:

Also, she played many roles in many famous tv shows among them some series are given below:

Erica Cerra's has estimated net worth is to be $1 million. Cerra's earned million-dollar by appearing in many big movies as well as a television series. From her movie Percy Jackson and the Olympians: The Lightning Thief collected $227 million and her movie Blade: Trinity earned a massive $128.9 million out of $65 million movie budget.

She has worked in Supernatural, Lucifer, Welcome Home, iZombie, The 100, Package Deal, Rush, Motive, The Wishing Tree, Eureka, and Battlestar Galactica and so on.