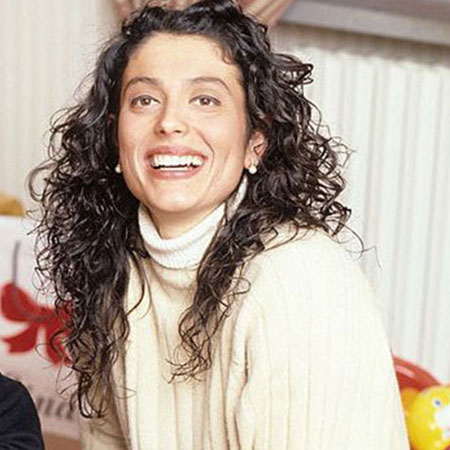 Enrica Cenzatti, the first wife of singer, songwriter, record producer, musician, and operatic tenor Andrea Bocelli was born in 1969. She is 50 years old Italian women whose childhood was very interesting.

As per information, she has an average height and weight with Black curly hair and a brown color eye.

Enrica first met Andrea Bocelli in 1987 at Piano bars in one of the evening. She was 17 when she fell in love with her boyfriend Bocelli's voice and eventually with him. Their relationship got deeper and deeper and their romantic bond converted into marriage on June 27, 1992.

Few years after marriage, on February 22, 1995, Amos was born as a first child from Cenzatti and Bocelli. Again on October 8, 1997, they welcomed their second son Matteo in this world. Enrica along with her husband and children have appeared in several pictures published by various publishers in 1990.

The relationship didn't go further ahead and finally, they became apart in 2002 due to the dissolution of their marriage. Despite the divorce, they raised their two kids together living near to each other in Forte de Marmi, a resort in Tuscany, Italy.

Andrea Bocelli is a blind Italian musician and singer who has lost his eyes sight at the age of 12. He was diagnosed with congenital glaucoma though he was born with sight. He also suffered from a brain hemorrhage due to hit of a ball in the eye when he played football and untimely lost his complete eyes sight.

"Morning shows the day" like that Andrea Bocelli was interested in singing from his childhood. Not only that he also played various instrument including the piano, the flute, drums, guitar, trombone, and saxophone.

As his interest, he was voted as one of the "50 Most Beautiful People" in 1998 and he also honored a spot in the Guinness Book of World Record for Sacred Arias. Similarly, in 1999, he was nominated for the Best New Artist at Grammy Awards. His duet with Celine Dion titled "The Prayer" won a "Golden Globel Award" for the best original songs.

Not only that he was honored with a Hollywood Walk Of Fame Star on March 2, 2010. His Voice is one of the most beautiful voices of the world that once Oprah Winfrey announced: "When I heard Andrea Sing , I brust into a tears" in a stage.

Net Worth of Enrica Cenzatti

It has been recently estimated that Andrea Bocelli her ex-husband is an Italian tenor, multi-instrumentalist, singer, songwriter who has a net worth of $ 40 million.

According to law of US, the father must pay 25% of the weekly income for two children who were living with Enrica.

She even got some amount of money and assets after divorce. Calculating all this her net worth is estimated between $5-$10 million.