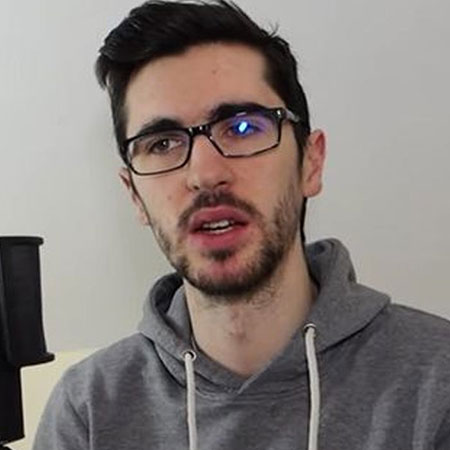 Daithi De Nogla is a popular Irish YouTuber known for his hilarious rage, making random sound and weird noise as well as his annoying personality commentary while gaming. He has more than 6.4 million subscribers on his YouTube channel.

David Martin Nagle also was known as Daithi De Nogla born on July 6, 1992, Limerick, in Ireland under the zodiac sign of cancer. He holds an Irish Nationality and white ethnicity.

He has a twin brother named Zer0_Craic, a.k.an Aindreas de Nola and a sister. He was gaming enthusiast since, his childhood and turned into a specialist in gaming at a very young age.

Daithi De Nogla studied in Institute of Technology Tralee in County Kerry, Ireland. He couldn't proceed with his education since he expected to focus on his youtube channel.

Nogla began his career by creating a YouTube channel named 'DaithiDeNogla' on January 16, 2012, and started posting post gaming commentary. As of January 2019, he has about 6.4 million subscribers and has posted more than 900 videos till this day with more than 1 billion views in his channel.

He basically focuses his channel on making content for the younger audience. He often collabs with other YouTubers like VanossGaming, I AM WILDCAT, TheGamingTerroriser, Mini Ladd, BasicallyDoWrk, SMii7Y, JackSepticEye and many more.

Some of the video games on which he makes his commentary content include ‘Grand Theft Auto V’, ‘Move or Die’, ‘Happy Wheels’, ‘Garry’s Mod, Battlefield 1, Black Ops 3, Call of Duty Zombies, and ‘Who is Your Dadd’.

Apart from Youtube he even did his career as a singer and has released about 3 songs in 2015.

Noglas's net worth is estimated to be around $1.1 Million. As a successful YouTuber, he has earned some decent amount of money. His monthly earning is estimated to range from $4k to $63.8k,  According to his social blade status.

He is known as the second largest YouTuber after 'jacksepticeye' in Ireland. He makes additional money through sponsorship deals from companies and selling merchandise. Nogla  has some merchandise of his that are sold online with his names and popular catchphrases.
His entire earnings on the youtube have been placed at over 12 million dollars.

He also owns a Lamborghini. He has two pet dogs named Joe and Tony which he loves very much and loves to share their pictures on his social media.

Read Another:1.73 m Tall American YouTuber Rudy Mancuso Not Only Famous For His Profession But Also For His Tattoos

Daithi is a famous youtube which he has won many hearts of his female fans but he is already in a relationship. His girlfriend name is Jacs' Style. Jac' Style is an American and most notable for sharing her diverse range of content to Instagram as well as in her YouTube channel.

There is hardly any idea regarding where the two met and to what extent they have been dating. According to their photo from Instagram looks like they have been together for a long time.

In free time he sometimes composes songs and plays his guitar and does cover time to time.