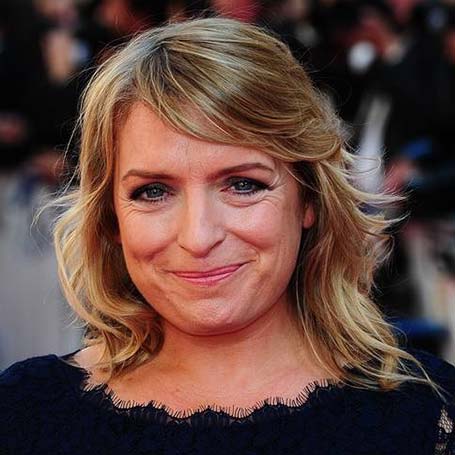 The British Actress Claire Louise Rushbrook is famous for her family business. She has appeared in the comedy series Carrie and Barry alongside Neil Morrissey and starred alongside Lisa Tarbuck in Linda Green.

Claire Rushbrook was born on August 25, 1971, and raised in Hertfordshire, England. She completed her high school from Fearnhill School and then attended the Rose Bruford College. Previously, she worked mainly in theatre for about 5 years and then eventually moved to film and industry.

Early in her career, she guest starred in many episodes of "Doctor Who", "The Impossible Planet", "The Satan Pit". She also had supporting roles in the films Secrets and Lies and Spice World.

She also appeared alongside Phil Davis in the 2008 EBC Comedy Series Mutual Friends and the 2009 UTVI dramas Whitechapel and Collision.

Claire Rushbrook not only appeared in Television and Films, but she also hosted radio shows.

CAPTION: Claire Rushbrook with the cast of Carrie and Barry
SOURCE: comedy.co.uk

In television, she has appeared in numerous TV shows portraying different roles. Such as a policewoman in Casualty(1994), Julia Carney in Touching Evil(1997), Yolanda in Spaced(1999), Faith Blackwell in The Sins(2000), Ida Scott in Doctor Who(2006) and many more.

You Gonna Love This: American Voice Actress Lacey Chabert's Ex-Affairs and Relationship With Her Husband and Children

She worked as a Radio Jockey in the BBC Radio station 4 Afternoon Play directed by Claire Grove. She voiced as Libby in The Sound of Solitary Waves, Gemma in Time Breathes, Emma in Love Contract and as Mrs. Wormwood in Matilda.

The exact net worth of Claire Rushbrook hasn't been found but it is estimated that she has a net worth of $2 million.

Although Claire is more known for her other works, we should all take a moment to appreciate that she was known as Deborah in the Spice Girls' world back in 1997.

"It was a crazy time in 1997, they were at the height of girl power madness. That role is completely different from anything I've ever done. But the girls were great. They were lovely and we had a brilliant time."

CAPTION: Claire Rushbrook with the Spice Girls
SOURCE: The Mirror

"Most of us in the cast are over 40, it's such a joy to get such strong scripts from the writers. They give us really juicy stories."

The 47-year-old British Actress has successfully managed to keep her personal matters a secret with the public eye. She hasn't married and bears no children.

About dating and her ex-boyfriends, she has never answered these questions and she is possibly single at the moment.

Similarly, she also hasn't been spotted with any male friends outside of her workspace. Her sexuality also hasn't been confirmed so there is no saying to whether is straight, gay or bisexual.