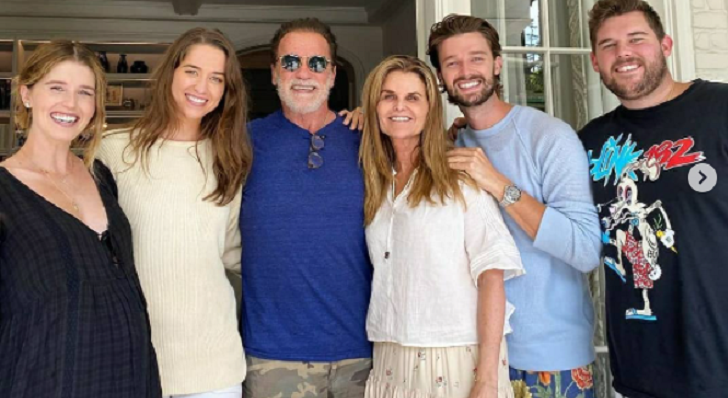 Christopher Schwarzenegger is an American star kid who grabbed international attention for being the youngest son of Hollywood legends Arnold Schwarzenegger and Maria Shriver. The star kid recently made headlines for massive weight loss.

How Old Is Christopher Schwarzenegger?

Christopher was born on 27th September 1997 in Los Angeles, California, the United States of America. By the writing of this article, he is currently 22 years old.

He was born as the youngest son of Arnold Schwarzenegger and Maria Shriver. His father is a famous actor and mother is an author.

The star kid has four siblings. The name of his eldest sibling is Katherine. Likewise, his sister is Christina, who is 27 years old, and his brother Patrick is 24 years old. Christopher also has a half-brother Joseph Baena.

His brother, Patrick, who was born on 28th September 1993, started his professional career at the age of ten. He has worked in movies like Stuck in Love, Scouts Guide to the Zombie Apocalypse, and Grown Ups 2.

His sister Katherine is an author. She studied at the University of Southern California. His other sister Christina is also involved in the entertainment industry and actively working as an actress.

His Personal Life; Is He Dating Anyone?

The star kid is yet to reveal information about his personal life, including his relationship status. Christopher has neither been linked with anyone nor ever spotted with anyone, so many sources assumed him to be single.

Some gossip mongers are claiming him to be in a relationship but keeping everything away from the media.

Back in 2011, Christopher met a surfing accident. He was only thirteen years old then. During the accident, he broke ribs, and his lung collapsed.

Talking about Christopher’s parents' relationship, they got married in Hyannis, Massachusetts, on 26th April 1986. The Rev. John Baptist Riordan performed the ceremony. They exchanged the wedding vows at St. Francis Xavier Catholic Church.

His parents ended their 25 years long marital relationship on 9th May 2011. His mother moved out of their Brentwood.

Talking about his sister Katherine’s relationship status, she is engaged to American actor Chris Pratt. As per sources, they started dating in June 2018. They got engaged on 17th January 2019.

They exchanged the wedding vows on 8th June 2019 in Montecito, California. The duo shares a child. They announced the pregnancy in April 2020, and their daughter was born in August 2020.

As Christopher maintains a low-key profile, the star kid has not revealed much about himself. But, in recent days, the celebrity kid seems to win the battle of weight loss. The 22 years old was seen in a rare outing in La La Land on 24th July 2020.

Christopher looked trimmer than ever. During the outing, he wore a Brentwood High School t-shirt, red shorts, and sneakers. He wore a Lakers face mask to protect from the spreading COVID-19 virus.

Professional Career And Net Worth!

As Christopher has not been involved in any kind of professional activities and work life, his net worth and earnings are also not revealed.

However, his father has a net worth of $400 million. His monthly salary is around $4 million, and he earns an annual income of $42 million.

Similarly, his mother has a net worth of $200 million, and his sister Katherine is worth $3 million. His brother-in-law Chris Pratt’s net worth is $60 million.