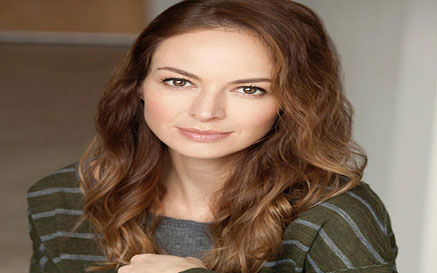 The 43-year-old actress, Christine Tizzard was born in 1976, to a Canadian parents in St. John's Newfoundland. Spent his childhood at his birth place, Tizzard currently resides in Saint John, Canada.

Christine started her training in a chef program at George Brown College, Toronto, and graduated with honors in 2010.

Christine stepped into the entertainment industry at the age of 15, and started modeling for beauty campaigns around the world. Her 1.74 m tall height and perfectly curved body figure supported her well to become an established model.

Christine's modeling career supported her to stepped into the television and movie industry. During her career journey, she has worked with the top brands and high high production networks such as HBO and ABC.

Christine's work as an actor and her participation in cinematography includes, Jesse Stone: Benefit of the Doubt (2012), Webdultery (2010), and Jesse Stone: Lost in Paradise (2015).

Christine met Ian Thornley through her brother, Ken Tizzard, who is a musician and Ian's buddy. Ian and Christine both were attracted towards each other with their very first encounter.

After dating for a while Christine stole Thornley's surname with a beautiful private wedding ceremony in 2003. Later, the husband and and wife gave birth to two children, son, Ozzie, and daughter, Sophia.

Christine Tizzard's Popularity as a Chef:

Even though Christine worked as a model and actress for long years, her actual love and passion was always linked with food and sharing the recipes of such food.

Christine gained global fame after participating in 2014, Master Chef Canada, which increased her enthusiasm towards becoming a chef and there was no turning back for Christine after that.

Since then, she has appeared in Rogers Television and City Line as a chief guest. Christine even participated as a Host at CBC's 'Best Recipe Ever,' for two seasons.

Christine is also the writer of the cookbook 'Honest to Goodness: Everyday Recipes for the Home Cook,' which was shortlisted in 2018 Canadian Cookbooks.

Christine's Quote as presented in her cookbook:

"Begin with the best ingredients and to make it from the scratch."

Christine has a YouTube channel, ''Three-way recipes" through which she shares her amazing and delicious food recipes with her fans.

In 2018, she teamed up with the Wild Blueberry Association and has been extracting benefits from the same association on her YouTube channel, where she takes a single ingredient and shows different ways make it in the kitchen.

Christine also worked as a spokesperson and brand ambassador for Philips, Dairy Farmers of Ontario, and Bonne Maman.

Christine's Instagram and Facebook activities show up her love, dedication, and passion for Food and Culinary Cop.

Tizzard's social accounts and public appearances reveal that she wants to push people towards eating healthy for a better and long term sustainable life.

After working as a model for few years, Tizzard started working for television and movies. Beside, she also worked as a host of the CBC's, as well as, an author of cookbook and chef. The multi-talented Chef, Christine's Net Worth is around $100,000.

Christine's famous rock star husband Ian Thornley ranks among the list of top celebrities in Canada, whose estimated net worth is around $500,000,