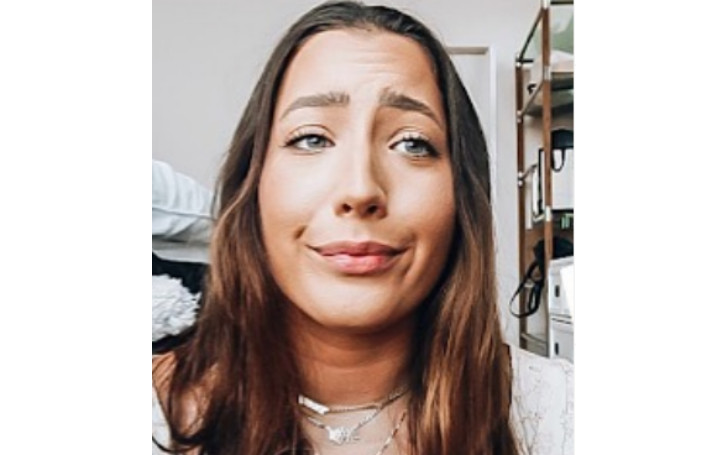 Brooke Houts is a popular American YouTuber known for her vlogs, story-time, lifestyle, and fitness videos under her self-titled YouTube channel. However, she also made it to the headlines for a "dog abusing video" for some time in 2019. She was heavily criticized for her deed which made her take down the video and re-upload a cut version.

How Old is Houts? Where Was She Born In?

The internet sensation Brooke Houts was born on 24 November 1998 in Atlanta, Georgia, US. She is 24 years old as of 2022. She was born under the zodiac sign Sagittarius.

The YouTuber holds American nationality and belongs to a White Caucasian family. She follows Christianity.

The details regarding her parents and siblings are under the curtain. Likewise, she hasn't revealed much about her childhood and her educational qualifications.

The social media personality was in a relationship with YouTuber Teale back. Their lovely relationship began in 2019 and often stole the limelight.

Likewise, Teale even posted pictures of her on his Instagram and even called her 'his rock'.

They shared 37 videos all together on their joint YouTube channel, however, the couple has not updated their channel for a year. Likewise, there are no recent updates regarding their relationship in 2022.

In addition, Houts was previously dating social media star Dolan in 2017. She also shared a video titled Kissing my ex-boyfriend, which was one of the most popular videos on her channel.

The internet star stands at the height of 5 feet 6 inches and weighs around 55 kg. Also, the color of her eyes is hazel green, and has brown color hair.

She loves to go shopping, traveling and listen to music. She is often captured visiting different places in her videos.

Brooke's Controversial Journey As A YouTuber

With her funny videos, attractive lifestyle, and personal story, she was able to gain more than 200k subscribers. She is also known for her collaboration with other YouTubers. She is seen doing different fun activities and game challenges in her videos.

However, Teale's girlfriend accidentally shared a video of her doing a prank with her dog Doberman Pinscher named Sphinx, in 2019. In the video, she was seen spitting, kicking, hitting, and so on with her pet.

The video went viral soon and earned her a fair share of backlash. More than 100k people were criticizing her for the abusive act which eventually led her to deactivate her Twitter account.

Not to mention, the world's largest animal rights organization PETA also tweeted asking YouTube to remove Brooke from the platform.

Many alleged that the dog should be immediately taken away from her. She had to face lots of negative comments, and she gained a lot of haters. Some even tweeted calling her a stupid woman "who is earning money by her criminal activities".

Later, the 23 years old internet personality apologized for her deed. She penned down an apology for her inhuman action which also garnered her few hateful comments and criticism.

She later deleted all the abusive videos from her channel. Also, it is reported that she got back her dog later, which was taken away for some time.

It is reported that the Animal Rights Officers investigated the action. Later, no action was taken against her by the Animal Task Force. As per the statement by Los Angelos Police to the Buzz Feed, she was not charged with animal cruelty.

The internet personality is undoubtedly living a luxurious life with her family. Houts often flaunts all her luxuries and comfortable life on her social media profiles, especially YouTube.

She, along with her boyfriend, has started a YouTube channel together, which has over 3k subscribers. As the channel is no longer active, it generates around $8 to $124 per year.

Furthermore, she had over 20k followers on Twitter before it was deleted.