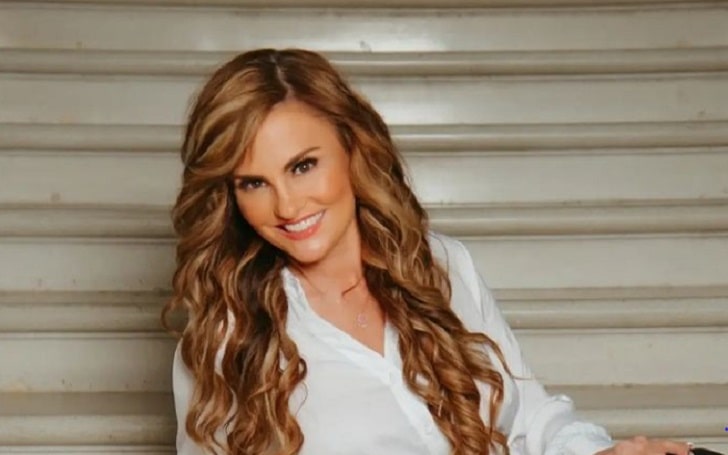 Aura Cristina Geithner is a prominent Colombian actress and singer who have appeared as Isabel Barragán de Montejo in The Prodigal Daughter in 2017. She is also a social media influencer who has been married twice in her life and is also a mother of a son Demian Dos Santos.

Born on March 9, 1967, Aura is 54 years old who grew up alongside her twin brother, Harry Geithner. He is also an actor who has been in the film line since 1995. She is a native of Bogota, Colombia, who was raised by her beloved parents, Heriberto Harry Geithner Castrillon (father) and Cristina Cuesta (mother).

Her full birth name is Aura Cristina Geithner Cuesta. The 54 years aged actress was initially interested in arts, so she studied painting. Not only that, but Geithner also studied international public relations in her teenage years. She also took impulse from actors like Liam Neeson and Cate Blanchett.

Active Involvement In Acting Since 1980

Geithner mainly works in television series and got more fame after she appeared as Bárbara Serrano Zulbarán in Secreto de Amor, released in 2001. Following year, she got a chance to star in GataSalvaje. Throughout her long-term journey in the entertainment industry, the actress has been portrayed in numerous series, and now she is working on her upcoming project, Asalto al mayor.

On the other hand, she is also a talented model and singer. Her famous songs are Firme hasta el fin, Calor, La potra zaina, and La casa de las dos palmas. The singer has performed in various events and concerts, including Teatro Metropolitano de Medellín in 1995. In the same year, she also performed at Club hípico Bacata and Bolsa de valores. Moreover, the actress has also written a book Confesiones, published in Colombia in 1998.

Who Is Her Current Novio? Everything On Her Marital Life

Currently, the talented singer is in a relationship with an architect from a different nation. She opened up about her new love back in 2019 during an interview. But the Waking Up With You actress denied sharing her partner's name in the media. Also, she has not made any post on her Instagram handle.

Apart from that, Geithner previously made headlines for her multiple marriages. Firme hasta el fin alum dated actor Miguel Varoni. But the intimate relationship between them could not last long. Similarly, another known partner of the actress is Marcelo Dos Santos, who is also a well-known Argentine actor. They were married from May 9, 1998, to 2000. Throughout their wedding life, the former couple also welcomed a son named Demian Dos Santos.

After her separation from Marcelo, Geithner again got hitched with oxer Thomas Corell Lundberg. Reportedly, they tied the knot in 2011. However, their bond did not last long. So, now, Geithner cherishes a romantic life with a mysterious guy who is 10 years younger than her.

The established Columbian actress and singer have collected a good sum of money from her active work in the showbiz industry. As per a source, she is estimated to have a net worth of around $1 million. Besides, she is not only engaged in acting. She has a huge social media following, and her estimated earning from a single post on Instagram is around $2,170.5 - $3,617.5.

But Geithner makes most of her gains as an actress. In Columbia, an actress earns around $29797 a year. And a singer has a moderate pay of $36,843,368. So, Aura might make above the average pay as she has been involved in this field for a long time.

Likewise, Aura makes money from modeling, sponsorship, and endorsement deals. At present, she is also engaged in the adult site from where Geithner might be earning a fair profit.