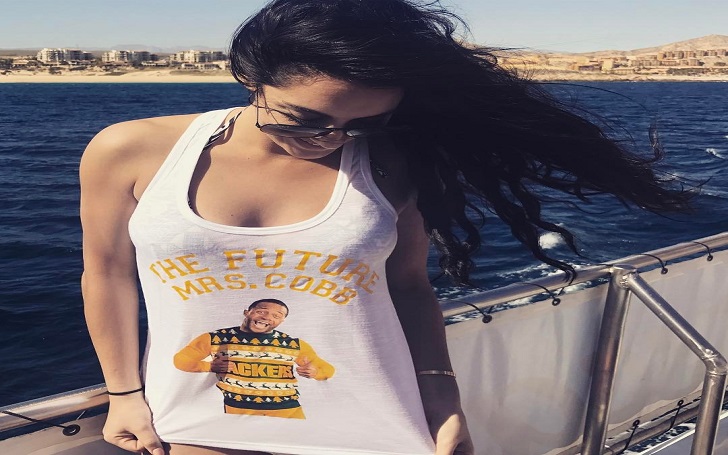 Aiyda Ghahramani is a patent attorney at a famous law firm of Washington DC and is popular among the media as the wife of American football player Randall Cobb. She as an attorney who solely focuses on patent infringement cases mostly related to the biomedical field and she is quite good at her job.

She was born in 1989 as the second child of Bahanor and Shahla. Her parents belong to the Persian descent and she herself is quite fluent in Farsi. It is the national language of Iran. She is currently 28 years of age.

She has an older brother named Ariya who is an actor of HBO's series the Night Off, Bert and Arnie's Guide to Friendship and the Brightest Star.

Aiyda is quite proud of her background and culture. In fact, there was a Persian ceremony as a part of her wedding. Even the DJ at their wedding played some Persian music.

She has a good height, judging from the pictures and she looks good while she stands with her husband who is five feet 8 inches.

Another One: American Political Figure Steve Bannon Has Managed a Good Net worth, Earns Well From His Profession

She earned her Bachelor of Science degree from Rutgers, the State University of New Jersey-New Brunswick. She got it back in 2011 but decided that she wanted to be more than just a regular science student and therefore she attended New Hampshire School of Law. She got her Doctor of Jurisprudence degree in 2014.

While she was an undergrad, she ran track and did cross country. She was also a student mentor in her student career and named a National Merit Scholar.

After she passed out of New Hampshire School of Law in 2014, she joined Sughrue Mion PLLC. They focus solely on intellectual property law and she works as an attorney in the firm.

Her background in the Science field hasn't gone waste since she focuses on the biomedical field. She is also involved in counseling.

She started working in the firm as a summer associate back in 2013 and, later in 2014 she joined the permanent position of an attorney.

Aiyda is famous for being the wife of Randall Cobb, who plays as a wide receiver for Dallas Cowboys. The duo celebrated their marriage in 2017.

This couple met first at an EA sports event that was held at Manhattan hotspot Lavo in 2011. It was a time when Randall was looking to join NFL draft and Aiyda was preparing for law school.

For Aiyda it was love at first sight. But the couple didn’t date immediately. They remained friends until in 2014 that they actually started to date. And after two years of dating, Randall bent his knee to the woman who would later be the mother to his child.

The couple got engaged on 2016 April 15. In 2017 they united as husband and wife in a lavish ceremony held at The Pierre, New York City.

On 10th August of 2018, their happiness knew no bounds because on that day they have gifted a son whom they named Caspian Cyrus Cobb.

Aiyda Ghahramani's net worth isn't available in the media but since she is a lawyer she must have a decent amount of salary and a decent amount of net worth. She shares the fortune with her husband and from all the success Randall Cobb has, they must be living lavishly in Washington D.C.

Aiyda has been blessed with a wonderful husband, a secure job and a loving son. We hope the same with her in the future days.