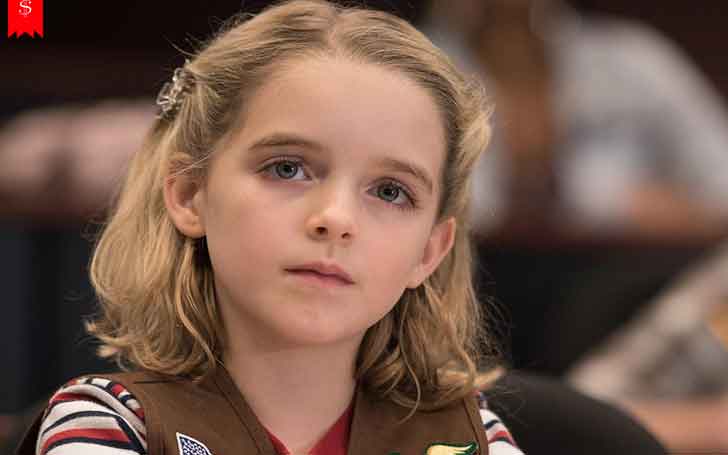 Mckenna Grace is the daughter of father, Ross Burge, and mother, Crystal Grace.

On her 5th birthday, Mckenna's great-grandparents gave her a DVD collection of Shirley Temple movies. After weeks of watching them, she declared that it was what she wanted to do. Mckenna’s desire and passion to entertain started at that point.

She started attending a local acting class in addition to putting on plays at home with her stuffed animals. As a matter of fact, the people running the acting class quickly took notice of her extraordinary talent telling her parents how she was doing things you just can’t teach.

Her parents kept in touch with an agent and within a week she booked her first job for a commercial for the YMCA. At the advice of the agency, the family flew to Los Angeles for a couple days and Mckenna booked her first audition for the feature film Goodbye World.

As fate would have it, her father, Ross Burge, was accepted into an orthopedic surgery residency program and the family relocated to California when Mckenna was 7.

She was homeschooled and has no plans to pursue high school. She became a Girl Scout on March 24, 2017, in Los Angeles.

Even at the young age of 12, Mckenna Grace is very much popular in her social networking sites with over 742k followers on Instagram and over 33k followers on twitter as of November 2018.

In 2013, Grace made her acting debut, portraying the role of Sydney in the television pilot Joe, Joe & Jane. Later, she reappeared on the Disney XDseries Crash & Bernstein.

She had a recurring role on The Young and the Restless as Faith Newmanbetween 2013 and 2015. In 2015, she had a reappearing role on the CBS series "CSI: Cyber".

Grace played the role of Daisy in the science fiction thriller Independence Day: Resurgence, the film, directed by Roland Emmerich which was released on June 24, 2016.

In 2017, Grace played a lead role in the Marc Webb drama film Gifted, starring alongside the actor, Chris Evans.

She learned ice-skating in order to portray the younger version of Tonya Harding in the biopic I, Tonya and also played the significant role of Juliet in the horror film Amityville: The Awakening along with actress and singer, Bella Thorne, Franck Khalfoun directed the movie.

Grace is slated to cast as Judy Warren, daughter of Ed and Lorraine Warren in the upcoming franchise of Annabelle scheduled for release in 2019. Grace is also set to appear in the 2019 Marvel Studios film Captain Marvel as the younger version of the titular character.

She was the winner for Breakthrough Performance and Best Performance by a Youth at the Phoenix Film Critics Society Awards 2017 for her role in "Gifted".

As of November 2018, Grace’s estimated net worth is $300 thousand. Some sources have revealed that she has a salary of $10K to $15K per episode. She has appeared in various advertisements as well however, her advertisement fees haven't been disclosed.